Posted on June 17, 2013 by epicnationtickets 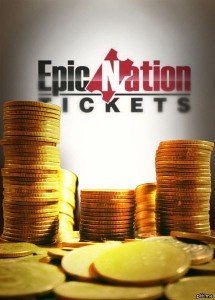 The college baseball world is set to invade Omaha, Nebraska for the 63rd straight year beginning this weekend. From June 15-26, the College World Serieswill be played among the eight best teams remaining at TD Ameritrade Park in Omaha. Fans eager to purchase College World Series tickets will be numerous as the eight teams remaining have amazing fanbases ready to make the trek to Omaha in hopes of seeing their team hoist the NCAA National Championship trophy. For a limited time when purchasing tickets, use promo code “OMAHA” to receive $25 off orders over $150.

Participating in the College World Series will be the North Carolina State Wolfpack, University of North Carolina Tar Heels, LSU Tigers, UCLA Bruins, Indiana Hoosiers, Mississippi State Bulldogs, Oregon State Beavers, and Louisville Cardinals. The eight teams will be a part of double elimination tournament. Currently reserved tickets are sold out at the venue, so fans are encouraged to purchase their premiumbaseball tickets from Epic Nation Tickets. Epic Nation Tickets is known for having the largest supply of discount College World Series baseball tickets. The best case for fans is to compare prices of Epic Nation Tickets to other brokers, as they will match almost any price.

The LSU Tigers are the most decorated team left in the field, bringing to Omaha, their six national championships. The only other past champion is two time champion, Oregon State Beavers. College World Series tickets will be in high demand this year as many schools are making their first trip to Omaha or returning for the first time in a long while. Baseball fans are in for a treat this year as the NC State Wolfpack and UNC Tar Heels will be matched up against each other on Sunday. With many fans traveling to Omaha, it is best to secure cheap tickets now before arriving to Nebraska.

Epic Nation Tickets continues to be the foremost authority for discount premium tickets to all sports, concerts, Broadway shows and Las Vegas acts. All transactions are 125% guaranteed.