Posted on September 24, 2013 by epicnationtickets 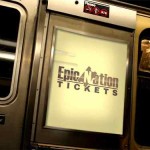 Categorized as one of the greatest rappers of all time and undoubtedly the king of rap right now, Jay-Z is set to go on his solo world tour starting in a few months. The “Magna Carter World Tour” has been long awaited and beginning in November, Jay-Z will take his act across the United States and the world for 34 shows. Many Jay-Z tickets go on sale to the general public today, but Epic Nation Tickets is offering discount Jay-Z concert tickets now before you can buy them.

Jay-Z announced the first leg of his “Magna Carter World Tour” on September 6th, which coincidentally was the same day that Kanye West announced his upcoming “Yeezus” tour. This definitely set the music world on fire, as two of the most powerful musicians in the game released upcoming tour dates on the same day. Nevertheless it is no secret that many Jay-Z concerts will sell out far in advance of their scheduled dates. Jay-Z just finished an incredible summer tour with Justin Timberlake which brought out thousands of people to each show. Epic Nation Tickets is anticipating high ticket demand for all upcoming Jay-Z concerts. Thus, Epic Nation Tickets is already releasing affordable Jay-Z tickets for all shows on the “Magna Carter World Tour”.

The first leg of the “Magna Carter World Tour” will begin on November 30 in St. Paul Minnesota. From there Jay-Z will travel to such cities as Omaha, Los Angeles, Las Vegas, Houston, Dallas, Atlanta, Charlotte, Detroit, Brooklyn, Washington DC, Boston and more. For the best opportunity to receive Jay-Z tickets before they go on sale to the general public, Jay-Z fans are encouraged to purchase advance tickets from Epic Nation Tickets.

Epic Nation Tickets is the best source for tickets to all sports, concerts, Broadway shows and Las Vegas acts. All ticket transactions come with a 125% guarantee and impeccable customer service. Those interested in Jay-Z tickets may also be interested in seeing his wife, Beyonce, live on her tour as well.