Posted on July 27, 2013 by epicnationtickets 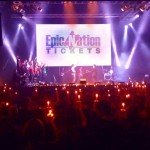 Nearly one month into his “Moonshine Jungle Tour” and Bruno Mars is receiving many high remarks thus far as his tour heads to the west coast of the United States. The Grammy award winning singer will be hitting big venues across the west coast over the next few days, and Epic Nation Tickets is the home for discount Bruno Mars concert tickets for all upcoming shows.

During this current part of his tour, Bruno Mars will be joined on stage with rising new star, Ellie Goulding. Over the next few weeks, Bruno Mars will be performing in such cities as Seattle, Portland, San Diego, Los Angeles, Phoenix, Salt Lake City, Las Vegas, Sacramento and more. After a recent show in Boston, one Boston Globe writer wrote this about a past Bruno Mars concerts: “14,785 fans in attendance left with more than a few beads of perspiration on their brow thanks to the indefatigable singer-songwriter’s ecstatic approach to performing.” To experience an incredible show like this, fans are encouraged to buy premium tickets now from Epic Nation Tickets at a low, affordable price.

Epic Nation Tickets is the best source for tickets to all concerts, sports, Broadway shows and Las Vegas acts. All ticket transactions come with a 125% guarantee and impeccable customer service. Those interested in seeing Bruno Mars may also be interested in Justin Bieber, Beyonce and Justin Timberlake.